A melted runway at London’s Luton Airport, wild fires raging in Portugal and France, and Italy’s Po River running dry from drought. Climate change is making our world warmer and the current heatwave gripping the UK and Europe shows the adverse consequences continue to get more severe.

In March 2022, the UK Met Office changed the heat wave threshold in the UK. In several counties where 30 years ago a prolonged temperature above 25C would have indicated a heatwave, the temperature must now hit 27C or 28C for an event to be defined as a heat wave. This is a tangible indication of climate changing and temperatures rising.

As climate change causes temperatures to rise, society must take action to mitigate the impacts. A precise geospatial understanding of where the greatest impacts will be felt can guide localised emergency response activity in the short term, and inform future urban planning strategy in the medium and long term.

Satellite data provides a means to understand where heat impacts will be felt the most, and where the “urban heat island” effect is at it’s strongest. 4EI’s Heat Hazard Index is made up of thermal satellite data from the previous three summers. The satellite data is statistically analysed to show where persistent hot spots are likely to be felt the strongest. 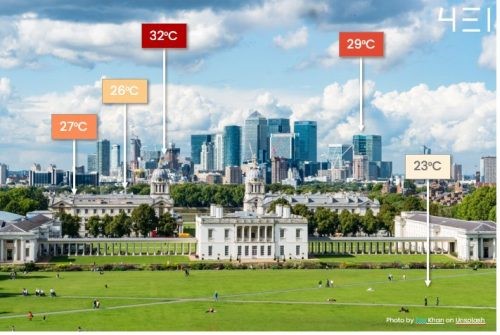 The urban heat island effect was clearly evident during the July 2021 heatwave. The Land Surface Temperature in Greenwich Park (measured using satellites), was up to 30% cooler than temperatures felt in nearby Isle of Dogs.

The BBC has taken 4EI’s Heat Hazard Index in Great Britain and analysed it alongside the index of multiple deprivation. The BBC’s analysis shows correlations between locations that are most at risk in the event of a heatwave, and areas where the most deprived sections of society live. This helps government agencies and urban planners prepare, manage risk, prevent death and more effectively deploy resources to mitigate the negative consequences. This powerful work has highlighted where climate poverty exists, and acts as a call to action for central and local government to mitigate some of the impacts of heat events. The data clearly shows that green and blue infrastructure (trees, parks, lakes and rivers) have a cooling effect in urban environments. There is a clear opportunity for urban areas to change and be designed with this in mind.

4EI’s Heat Hazard Index is a scalable and efficient product to find out heat hazard risks for local areas and property globally, at national scale. It has been licensed by a range of organisations and applied to many use cases, including environmental and climate agencies, to guide climate change mitigation, urban retrofit for property, urban master planning, heat network developers, housing associations, tree planting strategies, and property transactions.

To find out more please get in touch.

More From This Author